The organizer of Labelexpo Asia 2019 has confirmed that its 9th edition of Labelexpo Asia was its largest yet, reporting a significant 18 percent growth in buyer visitors and a floorspace that was 26 percent larger than its previous edition.

Taking place between 3-6 December at Shanghai New International Expo Centre (SNIEC), a total of 23,636 visitors flocked to the four-day show from a total of 90 countries, compared to 20,084 visitors from 81 countries at the 2017 edition. They were there to connect with over 350 industry leading suppliers from the region and worldwide, showcasing the latest label and package printing machinery, technology innovations and related products.

The many deals announced during the show included first-timer Winbosc, which sold five machines on site and signed a cooperation agreement with Taiyo. First-time exhibitor HanGlobal sold two digital presses on site, with Zhiqin printing investing in its second digital press, and a 12th digital press was sold to Kunshan Mingting. Weigang sold 28 flexo presses and eight ZX offset machines on site, alongside a dozen potential lines of its new ZP-480 rotary offset press. 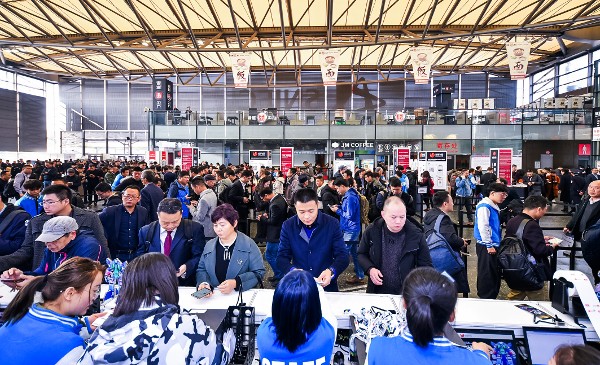 Lisa Milburn, managing director, Labelexpo Global Series, said: “We are delighted with the success of this year’s Labelexpo Asia. The huge leap forward in buyer visitors consolidates the show’s position as our largest show in Asia, a growth that is truly inspiring.”

A series of packed live demonstrations at the Flexible Packaging Arena took place on the show floor each day of the show. Making its debut, and introduced barely three months ago at Labelexpo Europe 2019 in September, this area of the show enabled visitors to see two press lines in action – a Xeikon 3030 and a Wanjie 660 – showcasing flexible pouch production.

Milburn added: “The label and package printing industry in China is currently experiencing a period of unprecedented expansion, and flexible packaging and smart labeling in particular are two huge trends we saw dominating this year’s show. The packed out feature areas and numerous live demonstrations are testament to the appetite for this technology, and are further proof that China is rapidly becoming an all-round key market force in an extremely competitive global market. This bodes extremely well for our two new shows in the region next year, Labelexpo South China and Brand Print China.”

Echoing this, Andrea Glawe, regional sales director Asia-Pacific, for first-time Labelexpo Asia exhibitor KROENERT GmbH & Co KG, said: “We were highly impressed with the large number of visitors at our booth and the detailed discussions. The focus of KROENERT was to show the new developed double-side silicone coating system. The reactions from the visitors were very open minded. In addition we saw the interest in new label solutions, recycling trends, integration of RFID and NFC-technology in labels as well as new environmentally friendly concepts for chemicals. The show was for us a good opportunity to keep in contact with existing customers and meet new ones.”

Zhao Jiangwu, general manager, HanGlobal, added: “From the development trend of global label industry, the “digital train” is entering the label printing “station” and becoming a new hot spot of the packaging industry. This Labelexpo Asia is the most significant and most comprehensive technology exhibition in recent years. At the show, HanGlobal brought the industrial single pass digital label printer LabStar 330 for the first time at a major domestic industry exhibition. LabStar 330 has attracted many vital business customers.”

Qiu Jianmin, CEO, Winbosc, also added: “I am delighted to attend this exhibition. Our sales broke through the expected target. Winbosc not only signed cooperation agreements with six clients, but also gained a lot of prospective customers, especially our new Digi Spark digital stamping machine also obtained high praise. This show is also a good opportunity to communicate with industry peers which motivate us new ideas for future research. We look forward to Labelexpo Asia 2021.”

The educational program, introduced at this year’s show, also proved extremely popular. Liu Haifeng, general manager, Tianjin Teda Great Print, said: “As a Chinese label converter, such international professional training classes will help us learn the forefront technologies and solutions, which is very important to enhance our own companies and integrate with the world. What’s more, integration of domestic and abroad speakers makes it easier for learners to use what we learnt into applications.”

Labelexpo Europe returns to Brussels and so does FINAT

Momentum builds for the return of Labelexpo Europe to Brussels