Ji Sung, the South Korea based label converter has installed the first Mark Andy Digital Series HD press in the country at its production facility in Suwon. The new DSHD press is the third Mark Andy press sale to Ji Sung negotiated by Phil Tech International, which represents the American manufacturer in the Far East. Earlier, a Mark Andy Performance Series P5 and an Evolution Series E5 had been added to Ji Sung’s flexo production capacity. All three presses were installed and commissioned by Mark Andy Europe, which is based in Warsaw, Poland, and is also responsible for the current service and after-sales support for Ji Sung and other Far East customers. 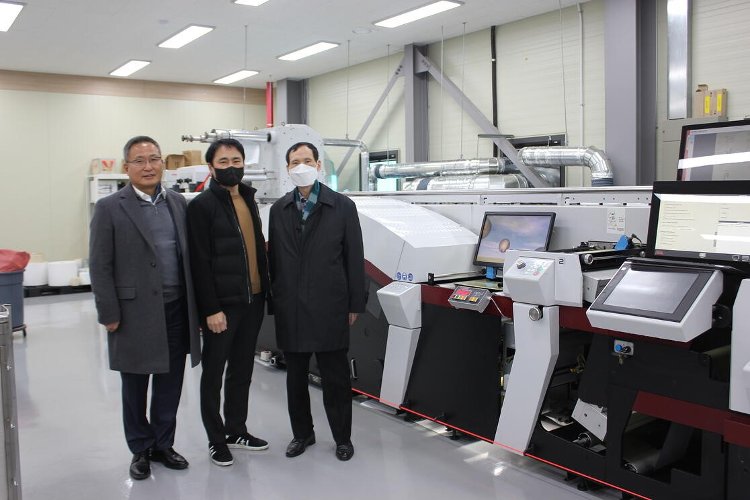 Founded in 1996 by Kim Jong-Chul, its current owner and CEO, Ji Sung T&I (Technology & Industry) has specialised in label production from the beginning, with most of its current work coming from the pharmaceutical and bio-product industries. Until its recent investment in digital print technology, Ji Sung had always used narrow web flexo presses, and its association with Mark Andy began in 2019 when it invested in 13-inch (330mm) 8-colour Performance Series P5 flexo press with UV drying.

Two years later, and following impressive productivity from the P5, Kim Jong-Chul decided to invest in additional flexo capacity from Mark Andy and selected a 7-colour Evolution Series E5, also with a 13-inch (330mm) web width. The latest installation of the Digital Series HD, which replaced an alternative solution, completes the Mark Andy package to date.

“We are using the hybrid technology for short- and medium-run production. The DSHD offers single-pass production, so is more efficient for these kinds of jobs than a flexo press,” said Kim Jong-Chul, adding, “Because of this, we can process orders faster and offer our customers a higher level of service. We are also looking for new customers with the hybrid technology and hope to grow business for the whole company.”

Speaking for Phil Tech International, owner Chi Bum Park said: “It is very special for us as Ji Sung became the first user of Mark Andy’s hybrid press not only in South Korea, but in the whole Far East region. The local market is becoming increasingly conscious of the opportunities offered by this technology, especially for short and medium length runs, as well as variable data and versioning of the same job. The investment in three Mark Andy presses was a breakthrough for Ji Sung.

In the past three years the company has grown dynamically and become very well-known across the region” Ian Pollock Mark Andy Europe Service Director, who was responsible for delivering, installing, and commissioning the press commented that the global pandemic situation of the past two years proved no handicap, despite travel restrictions.

“I should like to take this opportunity to thank Kim Jong-Chul for his trust in Mark Andy. It was a brave decision to invest in two advanced presses at such a difficult time.” He also acknowledged the part played by Phil Tech International in supporting the project and offered special thanks to Mark Andy’s partner Chi Bum Park for his commitment. “Last, but not least, I would like to mention our service technicians who were actively involved in this challenging project,” he said.

Mark Andy’s Digital Series HD is a hybrid solution that prints and finishes labels and flexible packaging in one pass. The press is equipped with an inkjet module, as well as flexo units and several additional options like die-cutting and laminating.

Ji Sung’s management is especially pleased with the DSHD’s Stitch AI automatic alignment system as well as its UV inkjet module that gives 1200 dpi resolution printing. “The Digital Series HD has taken around 20-30% of the jobs we previously printed flexo,” said Kim Jong-Chul, “and we plan to fill the rest of its capacity with work from new customers.” Chi Bum Park added: “The investment in a Digital Series HD

is a good fit for Ji Sung’s activities, as the company’s priorities are sincerity and a commitment to the highest possible customers service. I’m convinced the new hybrid press will prove to be a great asset for staying on this business path.” Tom Cavalco, Vice President Mark Andy, concluded: “We are delighted to announce the first sale of our hybrid press in the Korean market, and especially pleased that it’s the third Mark Andy press delivered to Ji Sung in a very short time.” He said

it confirmed the high standard of equipment and Ji Sung’s trust in the Mark Andy brand and its local dealer, Phil Tech International. “We hope all three Mark Andy presses will support Ji Sung to continue its dynamic growth and enable the company to attract business from new markets, both local and international", he concluded.