When wholesale trade printer FireSprint discovered a nesting bottleneck in its printing process, the company needed a fast solution that could be integrated without disrupting the rest of their workflow setup. Caldera PrimeCenter came to the rescue! By installing the prepress software upstream from their RIPs, they were able to make substantial savings in time and material as nesting became almost three times faster. 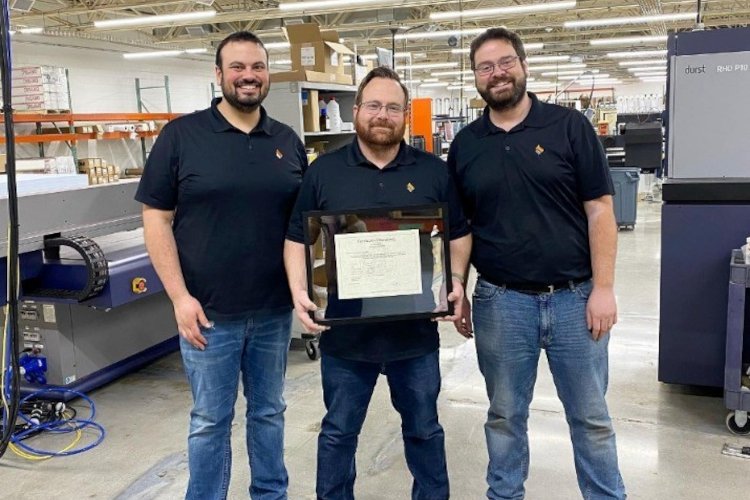 Earlier this year, in February, Omaha-based trade sign and graphics printer FireSprint moved into a new building. It took them a little while to get everything setup – they use Durst and Vangard printers and have a couple of Zund cutters – but even once they were settled in, Preflight/Nesting Manager Derrick Freese realized they had a problem.

“We only had one person doing all of our nesting,” he explains, “and it was taking many hours to get it done – up to 12 hours work a day in our peak season.” This caused a bottleneck in production. “Our biggest problem was not having a fully automated workflow. We would have to export PDFs and then drag and drop them into our program, do the layout and export the files, then drag and drop them again into the hotfolders they needed to be in.”

The solution to his problem was to install PrimeCenter – Caldera’s agnostic prepress software – upstream of the different RIP programs they were using for their different printers. PrimeCenter has been designed to allow print service providers to optimize their job preparation for digital printing and cutting. It provides automation along the print-to-cut workflow, so repetitive tasks no longer have to be done manually, saving time and avoiding errors, and resulting in less media wastage.

“Now we have PrimeCenter, it automatically imports the files that we need for our recipes and automatically generates the layouts,” says Derrick. “What that means is big savings – we’ve been able to at least triple the amount of nesting that one person can do in a day. It’s gone from around 80 nest layouts to over 230 per day.”

One of the things Derrick is particularly looking forward to is exploring how PrimeCenter will help FireSprint with variable data nesting. “We get Rally Fan orders that are double-sided, and PrimeCenter’s going to be a big help with those – it will let us set and export just the pages that we want with XML. We’re finding that PrimeCenter is also really useful when it comes to nesting for roll media. Previously we were limited to 34-inch chunks, regardless of if the nest was say just 20 inches. Now, however, using PrimeCenter we can print just the size of the chunk rather than printing to the full 34-inch length of media each time.

So far, increasing the level of automation in the workflow by employing PrimeCenter has saved FireSprint both time and money. “We still have some more things to fully automate,” says Derrick, “and we’re looking forward to seeing the change in the UI that’s coming in the new update.”

In other words, regardless of which RIP software, printers and cutters you use, PrimeCenter can provide enough automation to revolutionize your workflow – and who doesn’t want to save time and money while making life easier?

Caldera announces the release of Version 15.1