Beontag, today’s second-largest RFID label manufacturer globally, started in 2011 with the merger of two industry giants in Brazil: RR Etiquetas, the largest converter of self-adhesive labels for retail, industry, and services, and Colacril, the largest national manufacturer of self-adhesive labels, who also had a strong presence in South America. Just one year after the merge, in 2012, the company began investing in its first RFID machines. 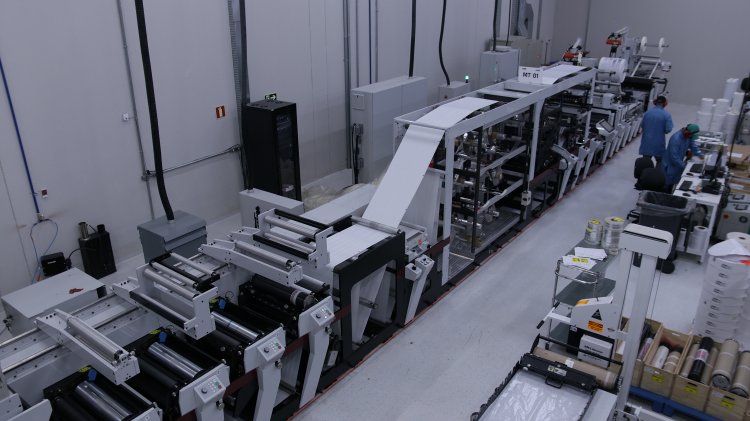 Their latest press purchase, a 20” Mark Andy Performance Series P7 fitted with a Tamarack RFID unit, and the six company acquisitions from 2021 until January, are proof that the business has flourished. “Investing in RFID technology has always been part of the plan. Ten years ago, it was an incipient market, with few people who had adopted the technology, but we saw a growth trend and business opportunity,” said Marcio Muniz, VP of Digital Transformation, Beontag.

Having customers’ best interests in mind, Beontag implemented fundamental changes that quickly made RFID solutions more attainable. In 2016, under new direction and leadership, they launched a plan to “democratize the technology”, which consisted in taking actions that helped them “establish an ecosystem that understood the power of the technology and had easy access to it,” said Muniz. To accomplish their goals, Beontag significantly reduced the initial price of RFID solutions to its customers.

The new strategy worked, and the operation soon started to grow in volume and market opportunities, generating cash flow and liquidity. “Then in 2018, we realized that keeping our solutions restricted to the Brazilian market would cause us problems in the future. If you look at the textile market, for example, and the big retailers, their vendors are from China, Taiwan, India… that was eye-opening in terms of realizing that the RFID market is global. We would not be able to compete for long unless we consolidated ourselves as a global RFID solutions provider,” explained Muniz.

And that’s when the need for a new press came into play. Beontag was looking for a machine that could essentially meet three needs: scalability, product differentiation, and leverage over large players. They were looking for a solution based on speed, capacity, and the ability to print more than just the common white RFID tag.

“We did a lot of research and compared solutions from several manufacturers. I particularly visited them all, and after seeing all the advantages of each machine, we chose to go with Mark Andy. The final decision was made based on scalability and the capacity of offering RFID tags with images, perfect flexography, and cutting-edge technology,” says Muniz.

Their Performance Series P7 is equipped with a Tamarack P500 RFID that operates at speeds up to 500 ft/min and is operator-friendly. In addition, it has four flexo print stations, reversed stations that allow them to print on both sides of the substrate, and has the capability of combining different layers of material. It also offers two die-cutting stations, and it can process up to six streams of finished rolls simultaneously.

Muniz also highlights the sustainability advantages of the machine. “By running it correctly, the press can significantly reduce waste, energy and optimize the production process, leading to savings. The machine is so fast and so powerful that can run up to 250,000 labels, depending on specifications, in about 40 minutes - something that would take us a whole shift to accomplish when using offline pieces of equipment we have on the floor.” Speaking of that, Muniz emphasizes that their Performance Series P7 frees up other machines in the industrial plant in Campo Mourão, Paraná, to get more work done. “That’s important for us because, as a converter, we run a variety of other jobs for several applications in that location as well,” complements Muniz.

All these benefits tie in with Beontag’s circular economy goals to reduce waste and overall waste. “The company takes Environmental, Social and Corporate Governance seriously. We carefully look at everything and everyone affected by our activities and develop best practices based on what will have the most positive impact,” said Barbara Dunin, Director of ESG, Marketing and Communications, Beontag. “The company has recently signed the UN Global Compact, and we are about to launch a revised ESG strategy with new KPIs and quantified targets to evaluate the program,” she adds.

According to Muniz, “the Performance Series P7 is a press ahead of its time.” It was created to fulfill the needs of customers who look for high-volume and customized RFID labels. Currently, the machine runs two shifts on business days. Because of its power, composition, high productivity, and speed, it runs less time when compared to other pieces of equipment on the floor. “It’s funny; you need to rethink your idea of productivity. When I go to the plant, I don’t see it running much. But then I talk with the operator, and he says it is because it already got the job done.”

Even though Beontag is still exploring all the machine’s capabilities, “because there’s an important learning curve when it comes to combining flexography and RFID technologies,” the P7 gives Muniz satisfaction and peace of mind when reaching out to customers and offering their product. “I know I have ‘a beast’ of a machine. In the past two years, I have never started a conversation with a potential customer with doubts about getting the job done, regardless of volume or embellishments. Before having the P7, I can’t say I was always 100% sure of being able to deliver the results the customer wanted while reaching our goals of profitability.”

Miguel Troccoli, Owner of PTC Graphic Systems, a Mark Andy local dealer in Brazil who sold Beontag the press and was responsible for the installation, says that the company learned the machine faster than he thought. "They had a lot of courage to embrace a project like the P7 with RFID in line as it put them on another level of production, global, (…) but Beontag has a unique administration and is managed by young, well prepared, professional leaders. They are a market reference.”

Being a reference rings true not only in Brazil but also internationally. Muniz says that 2021 was a year of acquisitions, and today Beontag already has the highest percentage of their operations in the international market, with industrial plants in six countries and sales operations in 12 countries. “This year, we are consolidating our positioning as a global digital transformation enabler company, and we plan to set a manufacturing operation in Asia. We are moving our global headquarters from Brazil to Milan, Italy, where we have just acquired two operations. RFID and self-adhesive labels continue to be our flagships, and we are planning to offer colorful RFID labels within the next two to three months. Our industry is less subject to innovation than others, like service, for instance. It is less connected to world trends. At Beontag, we strive to be trendsetters and modernize our industry. It is part of our culture,” he concludes.

“The award-winning Mark Andy Performance Series product line is an ally for companies with an innovative mindset like Beontag. The machine redefines workflow productivity through its simple design, efficient waste savings, and faster changeovers. Paired with a Tamarack unit, it opens up a world of possibilities as it combines the benefits of flexography printing with the RFID data tracking and collection capabilities," says John Vigna, Sales Manager LATAM, Mark Andy. “We hope to continue to support their global RFID label production. We have already started to discuss the possibility of upgrades or new pieces of equipment that will allow Beontag to tap into new markets and applications due to increased production flexibility,” affirms Troccoli.